Salvador Dali, one of the most well known artists of all time, was commissioned to create a tarot deck back in the 1970s. The result is the Tarot Universal Dali.

The cards measure 8cm x 14cm, making it one of the larger decks. Its main colour is gold, used in the boarders and the back of the card. While the major arcana and the court cards are presented in its typical manner with their names, the pip cards have no title and numbers on them. Aside from that, another feature that is unique to this deck is the roman numerals on the major arcana. While the common standard for 4 is IV and 9 is IX, Dali uses IIII and VIIII.

Instead of painting each card from scratch, Dali uses other masterpieces and adds to them. His additions are crude brushstrokes and, at first glance, appears as though a child has scribbled over these paintings. Upon closer inspection, however, one may be impressed  by how much symbolism he manages to convey with such simple strokes. And, perhaps, the roughness of his additions are meaningful in of themselves. Like the symbolisms they represent, they aren’t meant to be conclusive. Rather, they are vague to allow each user to impress their own meanings upon them.

My favourite card in this deck is The Magician, which is presented as a self-portrait. 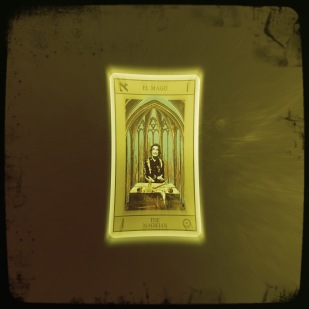 When I first saw this card, I was struck by the audacity and couldn’t decide if I was impressed with that level of self-confidence or turned off by the narcissism. After contemplating it for some time, I find this card to be very inspiring and really captures the ultimate lesson of tarot – which is that we are in control of our destinies. We are all magicians!

Aside from The Magician, I really like the major arcana as a whole. Like many other decks, every card in the major arcana is associated with a Hebrew letter and an astrological symbol. Where it differs from other decks is his assignment of the zodiac and planet to the cards. While these associations vary a bit between decks, the Universal Tarot Dali differs by quite a bit. A few quick examples are: the Sun is assigned to The Magician, Jupiter to The Emperor, and Taurus to the World.

The guide book that comes with this deck makes no mention of these associations at all so it is up to each user to decide how / if they fit. I find some of them (like Gemini’s association to The Sun card) quite interesting but am perplexed by others (like Capricorn with The Wheel of Fortune). I very much look forward to meditating upon these new associations!

Overall, I think these cards are visually appealing. Personally, however, I wouldn’t use this deck for readings as I find the images too distracting. Every card has Dali’s signature on it, making me all too aware of the artist behind the work instead of fully concentrating on the images themselves. Having that said, I am definitely glad to have this deck as part of my collection and I think anyone who is a fan of Dali or is interested in art history will also find this to be a valuable addition to their collection. I believe that I’m not alone in my belief that, aside from its use as a divination tool, tarot is one of the greatest medium for artistic expression and this definitely serves that purpose.

Having that said, in addition to being merely a collectors item, pondering upon Dali’s choices of paintings as well as his additions to them make this a good meditation tool.