The Syzygy Oracle is the companion to the oracle deck of the same title. The term syzygy (pronounced si-zi-jee) means a period of opposition between the sun and moon. Jung used the term to describe the union of opposites. It is used for the title of this oracle because it describes the spiritual journey from unconscious to consciousness.

The oracle is a representation of the Kabbalistic tree of life, which is comprised of 10 spheres called sefirot (sefirah is the singular term) and 22 pathways that connects them. Traditionally, each of the 22 pathways is connected to a Hebrew letter and a corresponding card in the major arcana.

While this isn’t the first or last oracle to be based on the tree of life, it is one of the most unique. Instead of applying new images on the standard interpretation, Mendel provides a completely new interpretation of the tree by making three radical changes.

The first change is the application of new names to some sefirot. While sefirot 2, 3, 4 and 5 aren’t much different from the traditional translation, the first and last five sefirot have received a new interpretation, making them less abstract and more practical for the modern student.

The second change is a completely new association of the pathways. 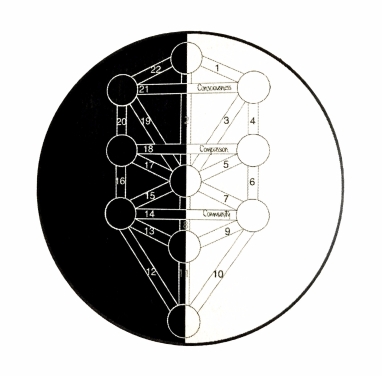 Traditionally, each pathway is connected to a Hebrew letter and major arcana. While different authorities will have a slightly different association, exchanging one or  two of the pathways, most follow the same structure of moving from top to bottom. Prior to this deck, the most revolutionary interpretation is the restored tree of life, in which the author moved from bottom to the top. With the Syzygy Oracle, the order of the pathway goes down the right side of the tree and back up on the left, creating a visual cycle.

Lastly, Mendel replaces the Hero’s journey of the major arcana with the Heroine’s journey. With the exception the Emperor – the Father archetype, all other archetypes are female.

I am incredibly impressed by the originality and wisdom of the reordering of the pathways. While the Hebrew letters and tarot card orders are still the same (ie: the letter Vav is still associated with The Hierophant and Nun with Death, etc.), this reordering means that the cards are now connecting different sefirot together. For example, where The Hierophant once represented the connection between Wisdom (Mendel’s naming)/Wisdom (conventional naming) and Compassion/Compassion, it now connects Compassion/Compassion and Innovation/Victory. And, yet, it still makes perfect sense! I love meditating on this fact. To me, it is one of the most beautiful demonstration of the concept that the every major arcana contains the seeds and manifestation of all the other cards.

Having that said, the one draw back is that this can get confusing to those who are new to the tree of life. For most of us, when we first study the tree, we are met with an overwhelming amount of information. Just learning the Hebrew letters will take some time and, once that is learnt, there is still the process of understanding how they connect to the sefirot. Learning a completely new arrangement will add to the cloud of confusion. Thus, my recommendation to those who are not familiar with the tree is to not focus on how the cards link to the tree but merely focus on the meaning of cards/pathways. Much wisdom and beauty can still be found in this way.

I also really admire the use of female archetypes in this oracle deck. This is coming from a woman who isn’t particularly offended by gendered pronouns and archetypes. I believe that gendered archetype representations aren’t limited to men/women or masculine/feminine. Rather, the gendered gods and goddesses are representative of yin and yang. To be offended by ‘negative’ associations to women is, often times, to miss the point and not see the universal energies/patterns that is being alluded to. I’ve read several feminist reinterpretation of ancient philosophies and have never found them useful. With The Syzygy Oracle, however, the feminist reinterpretation really spoke to me. There is no bitterness or resentful rejection of history, just an optimistic and humanitarian view of the future.

My favourite card in this deck is the Wheel of Fortune, to whom Mendel associates with Persephone – the Victim archetype. She was abducted by Hades and dragged into hell and brought back to earth by her mother. Thus, “through circumstances over which she had no control, came to her growth and maturity.”

The book further explains that Persphone’s story “is one of return that gives hope to all who confront major change. While loss brings pain, suffering can be seen as an attachment response to loss that we can learn to ameliorate. There are times when everyone feels victimized, battered and bruised by the seeming unfairness of circumstance. While we all experience situations over which we have no control, we have dominion over our own attitudes, beliefs and faith.”

This card speaks to me because I’ve always been uncomfortable with the damsel in distress narrative that so many of our fairy tales are based on. This card doesn’t condemn these stories, but rather, provides the lesson that we are to learn from this. To me, this is truly the goal of feminism – not to focus on the anger and injustice but to find ways to grow and become strong.