I’ve loved The Beatles’ music since I was a child, before I even knew anything about the band. Their songs are so universally loved that they managed to make their way into the home of an immigrant Chinese family. Even though my parents spoke little English, songs like Yesterday and Let It Be still flowed from their tape players.

I still remember watching the Beatles Anthology on TV back in the 90s with my sisters. We were fascinated by, not just the music, but the magic of the band. We wanted more than just the music; we wanted to know everything about the band, to fall in love with its members and be a part of that special something that was beyond words or logic. Almost three decades after the band dissolved, Beatlesmania lived on inside our house.

Naturally, when I discovered that there was a Beatles themed tarot deck out there, I desperately wanted to add it to my collection. In truth, this is one of those decks that I was determined to fall in love with so I’m thrilled to find that, even if I was more critical, I would still be extremely pleased with it.

For starters, the cards are large, measuring 3.5′ x 5.75′. For me, a person with average sized hands, this is a perfect size for decks with a lot of details. It offers enough space to display the images clearly while still allowing me to shuffle with relative ease.

As for the images themselves, I’ll have to admit that I’m generally not a fan of photos and collages for tarot. This deck uses both. To add to this, some of the images used aren’t of the highest quality. While some images are crisp and clear, many are a bit fuzzy around the edges. Furthermore, the digital merging of images are abrupt in some cases.

This is, however, quickly forgiven and forgotten with the understanding that the basis of the deck relies on images from as early as the 1950s. Given the limits of what the creators had to work with, I’d say that they still managed to put together a very visually diverse and appealing deck.

Furthermore, it is important to understand that this is definitely a content based deck. Every detail is carefully chosen to enhance the meaning of the card. Nothing is arbitrary. Each card is rich with symbolism that are incredibly well explained in the guidebook. 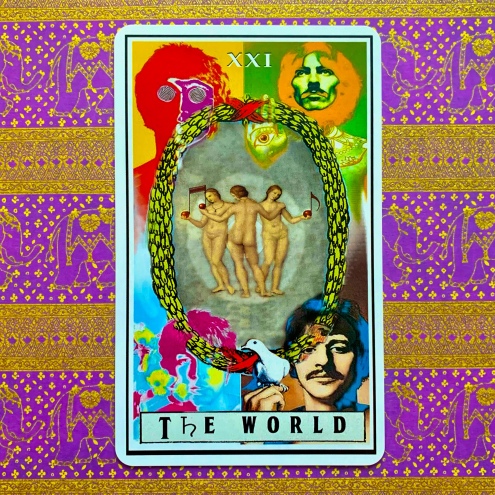 The deck is incredibly well thought out. The major arcana highlight the works and important aspects of the band while each Beatles represents one of the minor arcana. Ringo is Wands, not only because his drum sticks resembles wands, but also because he was the latest member and the spark that set this band on fire. George looks after the Cups because of his passion and attraction to spiritual pursuits. John is paired with Swords, which the creators refer to as S/words to emphasize the power of words in this suit, and to which John is a master of. Lastly, Paul is assigned to the suit of Pennies (a tribute to the song Penny Lane) because of the way he is able to take care of business. Of all the band members, Paul was most active in managing the band’s properties and assets.

One of my favourite cards in this deck is the 10 of Cups. It shows the four Beatles sipping tea in a seemingly idyllic scene. However, in the act of drinking tea, none of them are talking to each other and this can indicate the beginning of a communication breakdown. Also, this photo was taken near the end of their times together, an augury of less happy times ahead. In the background is George Harrison’s 120 rooms mansion. Again, while this seems like a sign of dreams fulfilled, we also see George standing alone with his guitar (probably weeping gently) in the window at the top of the mansion. This alludes to a sense of loneliness and that wealth and fame isn’t always what it’s hyped up to be.

As a reader who primarily focuses on the more positive aspects of the 10 of Cups, this version has expanded my understanding of this card in a way that is logical and a natural extension of how I normally read it. This is only one out of the many cards from which I felt like I’ve learnt something. Having worked with tarot for over 20 years, it is incredibly refreshing to find a deck that offers a different perspective that I genuinely learn from. 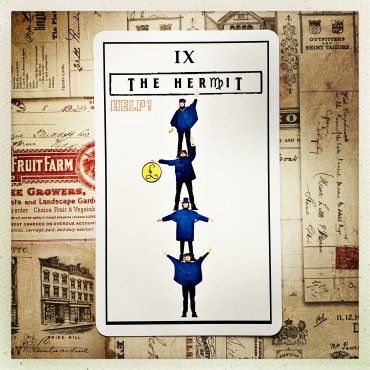 I thoroughly enjoyed reading the key to this deck. Not only did I feel like I was learning tarot again, it felt like reading a biography at the same time. The creators show a great understanding and respect for the band by depicting them as they were, in all their accomplishments and flaws. They then take this knowledge of the band and weave it seamlessly into the lessons of the tarot. It is one of the most enjoyable guidebooks I’ve ever read and a perfect complement to such a well-researched deck. 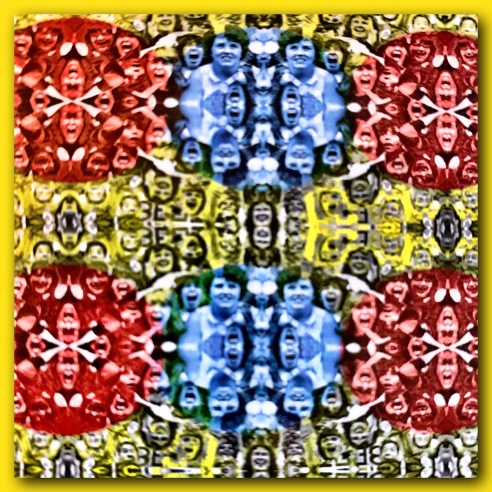 Another thing that I really like about this deck is the card backs. It is a kaleidoscope of screaming fans, a most iconic image of Beatlesmania. To me, this feels like a perfect visual summary of the magic the band created and the impact they’ve left behind. They gave the world so much and still left us screaming for more.

The Beatles Tarot does an amazing job combining fun with depth.

This review is also posted on Indie Deck Review