There is a lesson embedded in every tarot card. With the 10 of Wands, the lesson is that of responsibility.

This card is the final numbered card in the suit that teaches us how to create. Creation is the process by which our lives unfolds. Everyday, we create the lives we live through our thoughts, words, and actions. The 10 of Wands reminds us that we are responsible for all that we create.

The attitude attached to this concept of responsibility varies between decks but most follow the example of the Rider Waite Smith deck. In this version, we see a man bent over with the weight of the ten wands he is carrying. 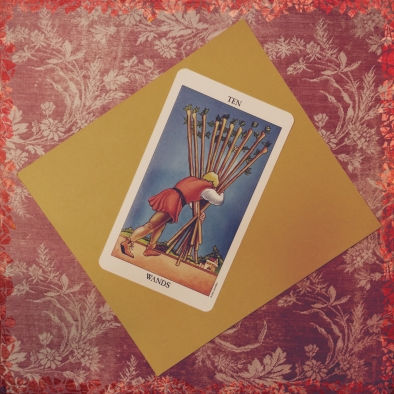 When I see this image, I imagine that the man is a farmer and he is taking his harvest into the village to sell. While he may be pleased with the result of his harvest and optimistic that it will fetch a good return, at the moment, he is neither happy nor excited. Instead, all he feels is exhaustion from carrying this heavy load.

Contrast this image to the 10 of Wands from the Shadowscapes deck. 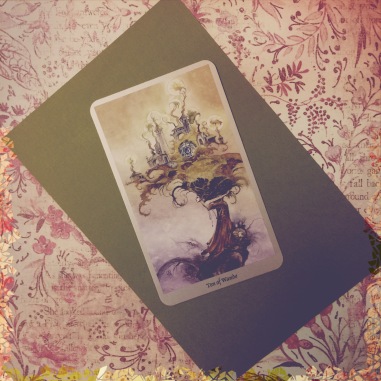 The protagonist in this card is also bent over because she carries something heavy on her back. Instead of ten wands, what she is upholding is an entire castle. She is a tree but also Mother Nature herself. She upholds the castle – which is the symbol of home for all humanity – with grace and serenity.

Both figures represent the concept of responsibility. However, one sees responsibility as a burden that we must bear while the other sees it as an honour that we uphold. Both interpretations are equally valid but which one we choose to empathize with makes all the difference when we are confronted with difficulties.